My senior year of college I applied to a national scholarship and unexpectedly won, prompting me to move to Dubai, UAE for 9 months to study abroad.

The entire experience was life changing, and I did things I never would have gotten to do otherwise (how many people can say they partied in the Burj Khalifa?)

However, upon the end of my study abroad I realized that I had spent so much anticipation and planning on my actual year overseas, that I didn’t anticipate the other half of the experience…

Anytime someone spends a temporary yet extended time abroad, they have the opportunity to build a connection with that new culture and lifestyle. Duh, that’s kind of the point.

You may have heard these same people say that since coming home they have experienced a sense of “reverse culture-shock“.

Feelings of isolation, distress, melancholy and disassociation are the more severe forms of reverse culture shock, but at it’s essence it involves the emotional and psychological challenges of coming back to a place you expect to feel like home, but for some reason doesn’t.

The first instance of reverse culture shock that I experienced returning home was just walking down the main street in my college town. It felt similar to deja vu—as if I were abruptly waken up from my study abroad dream, passing the same old buildings and people, feeling like I had never left but simultaneously feeling like I’d never even been there before.

There were points in my acclimation to being back home where I felt as though I were living a double life.

There were points in my acclimation to being back home where I felt as though I were living a double life.... More on reverse culture shock here: Click To Tweet

“Real Gabby” has lived in Virginia the last 10 years, has a dog, hates winter, and has a friend group consisting of mostly college students from northern Virginia.

Then, there’s “Dubai Gabby”—who wakes up not knowing what adventures she’s going to get into that day, goes to the beach in December, and has a different set of friends who have lived completely different lives than an American.

While one version of myself may sound more idealistic (spoiler alert: it kinda was), the fact is both of them are a part of my identity, and coming home had given me a sort of mini-identity crisis.

Can I be both of these people at once? How can I go back to my old life, knowing there’s a variant of myself being left unrealized?

I felt as if I were left carrying around a ghost of an experience.

Although reconciling old and new identities may not be as easy as one may hope, its important to realize that these transitional feelings are felt by every first time extended traveler. You’ve bitten the forbidden fruit—you’ve seen the possibilities of a life completely different from the one you’ve known.

How many more are out there unlived, undiscovered?

A new hope—this has happened before, it will happen again. You have not “peaked”.

While there is a self-variant of you who has had an amazing experience abroad, there may be one in the future who travels solo, one who stays in a hostel, another who hikes Kilimanjaro—and at some point, all of them will likely have to return home.

So don’t get stuck in the twilight zone, feeling as though you’re home and not at the same time. It happened, I promise. Your time abroad was just as magical and meaningful as you remember it, and being home does not mean it was a once in a life time affair.

It happened, and it can happen again!

Allow reverse culture shock to be the discomfort you need to grow as a person, to reprioritize the things that you want in your life, and to get you on that next flight to another new identity, and new adventure.

Have you ever come home from a trip, but also felt like you left a part of yourself abroad? You aren't alone—read more at Packs Light: Click To Tweet

Did any of this resonate with you, whether you were studying or working abroad temporarily? Tell me your thoughts in the comments. 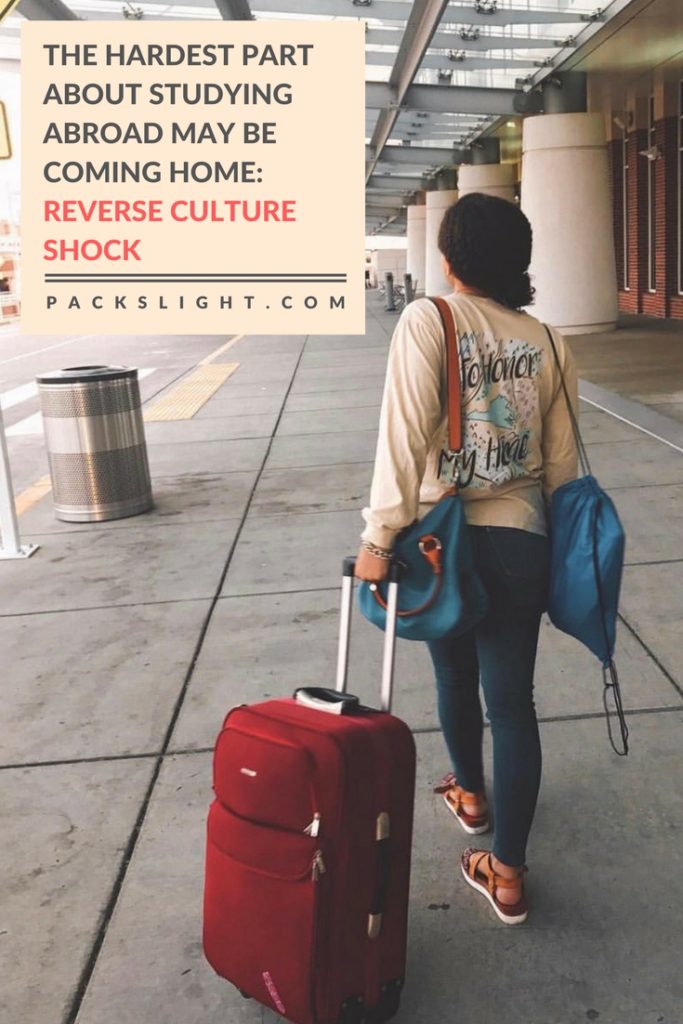 Gabby Beckford
The owner of this here website! She is a full-time travel influencer, Gen Z travel marketing expert, and sushi lover. Gabby empower young Americans to seek risk, seize opportunity, and see the world through communities like her Young Travelers Network, or her inspiring and informative posts about her travels to 50+ countries. You'll find her featured in pubs like National Geographic, CNNTravel, Forbes, Travel+Leisure, and Cosmopolitan.

Studying Abroad This Fall? Here’s How You Can...

How to Take More College Trips When You’re...

What is a Travel Opp? How I Travel...

8 Ways You Can Incorporate Travel into Your...

I experience reverse culture shock literally every time I come back home during uni break. I think what gets me the most is Walmart

I’m 16-Years-Old, and I Live Nomadically with My Family (Zariah) – YTN