7 London Attractions That Have Yet To Be Overrun By Crowds

Emma Bainbridge
Emma is a 17-year-old emerging freelance writer from the UK currently living in Canada. She enjoys writing about UK travel and Eurovision, and hopes to study political science and journalism in post-secondary. Visit her LinkedIn to find out more.

When we think of travel ‘off the beaten path’, the city of London is likely the opposite of what we imagine as it’s packed with tourists almost year-round.

I come to London frequently to visit family and so have made it my mission to find interesting places outside of the typical attractions.

Whether you are stuck in London due to COVID-19 or are planning a trip here in the future, here is a list of suggestions of quirky or underrated things to do in London that won’t appear on everyone’s Instagram.

St Dunstan’s in the East

Location: St Dunstan’s-in-the-East is located in Central London, near the Monument and the Tower of London. The closest tube station is Monument, on the District and Circle Lines. It is also a short walk from Bank Station, serviced by the Waterloo and City, Hammersmith and City, and Northern lines, as well as the Docklands Light Railway.

St Dunstan’s in the East is a paradise for photographers and those who relish the ancient ruins aesthetic. This church designed by Sir Christopher Wren was damaged during the blitz, but it still has managed to remain one of the most beautiful places in London.

Although it was only built in the 1600s, it has an elegance that makes it feel ancient. The church gardens are enclosed by large walls covered in vines.

The abundance of greenery makes it feel cool, even on hot summer days. While many workers come here for lunch, it is still a very peaceful location to escape from the crowds, be transported back in time, and snap some great pictures for the gram. 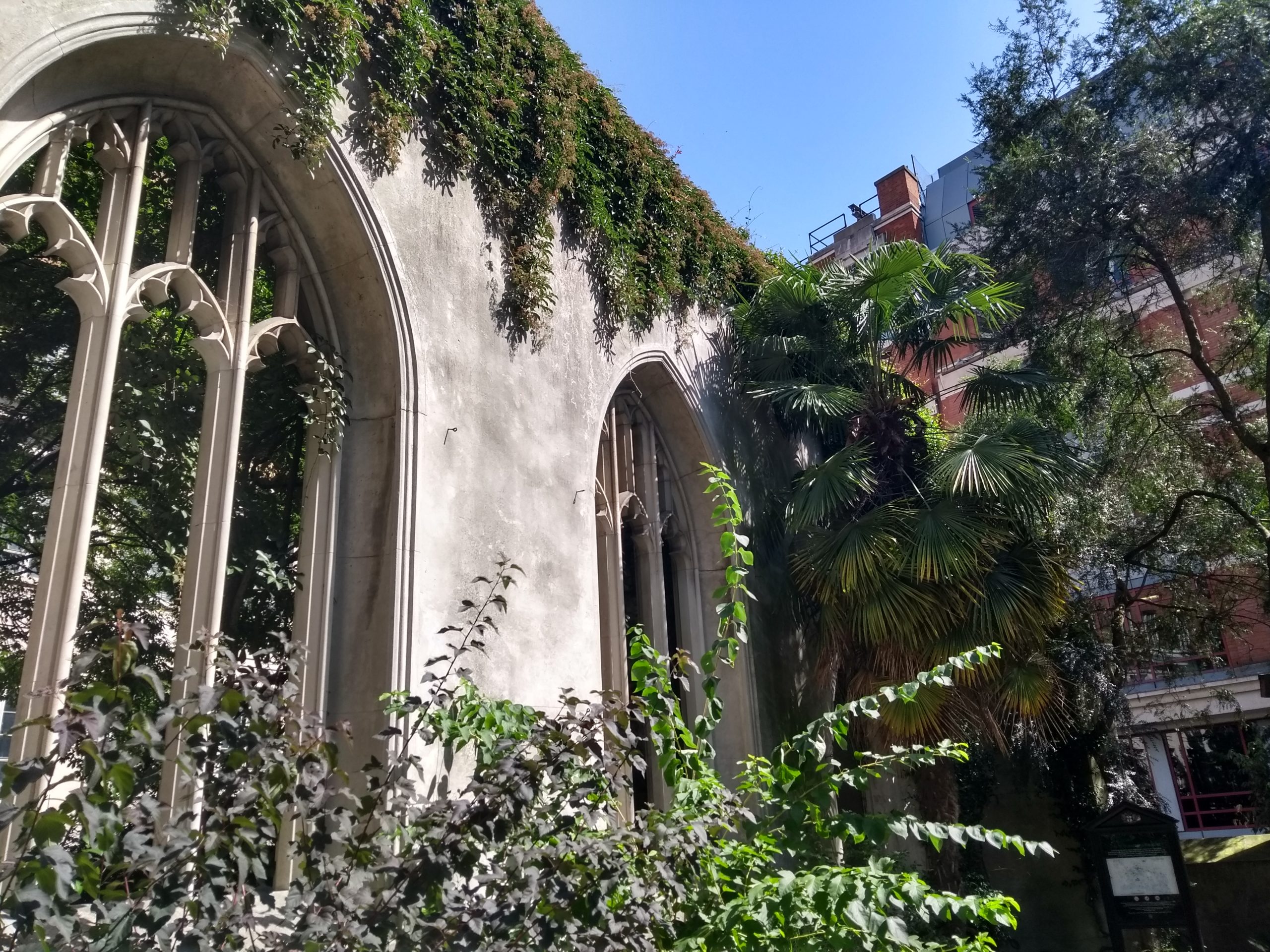 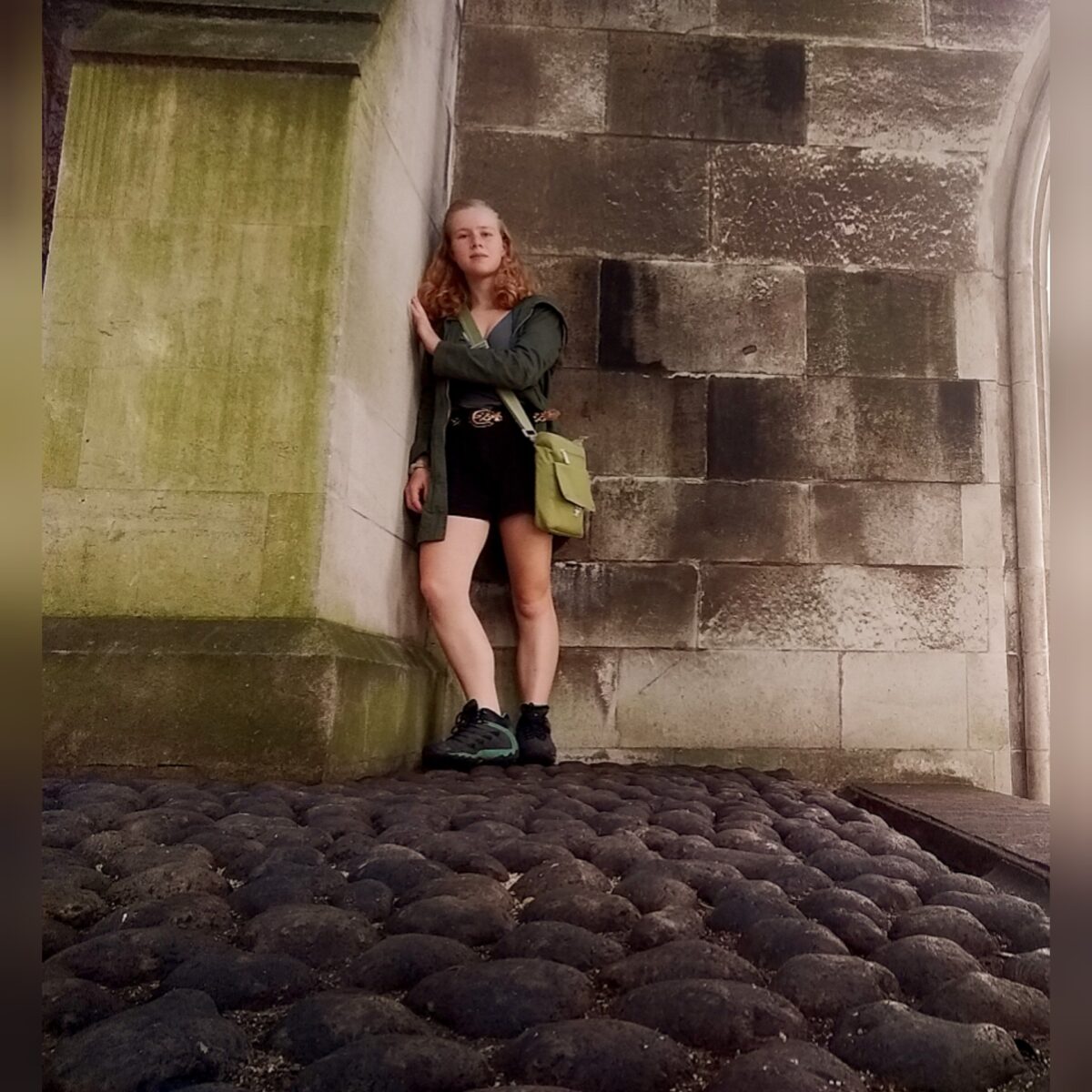 Location: 1 New Change, the nearest tube station is Mansion House, on the District and Circle lines.

One of the traditional things to do in London is to admire the skyline. However, if you don’t feel like walking 311 steps up the Monument, or braving the crowds of tourists at the London Eye, this place is for you.

One New Change is a mall right next to St Paul’s Cathedral with a rooftop terrace that offers a spectacular view of London – for free! All you have to do is take the elevator to the top floor. The terrace has a fancy restaurant and benches made of turf to sit on.

There will likely be a few groups of people there, but the space is big enough that they won’t get in your way or cramp your style if you’re trying to take pictures. However, take precautions if it’s a sunny day, as there is next to no shade! 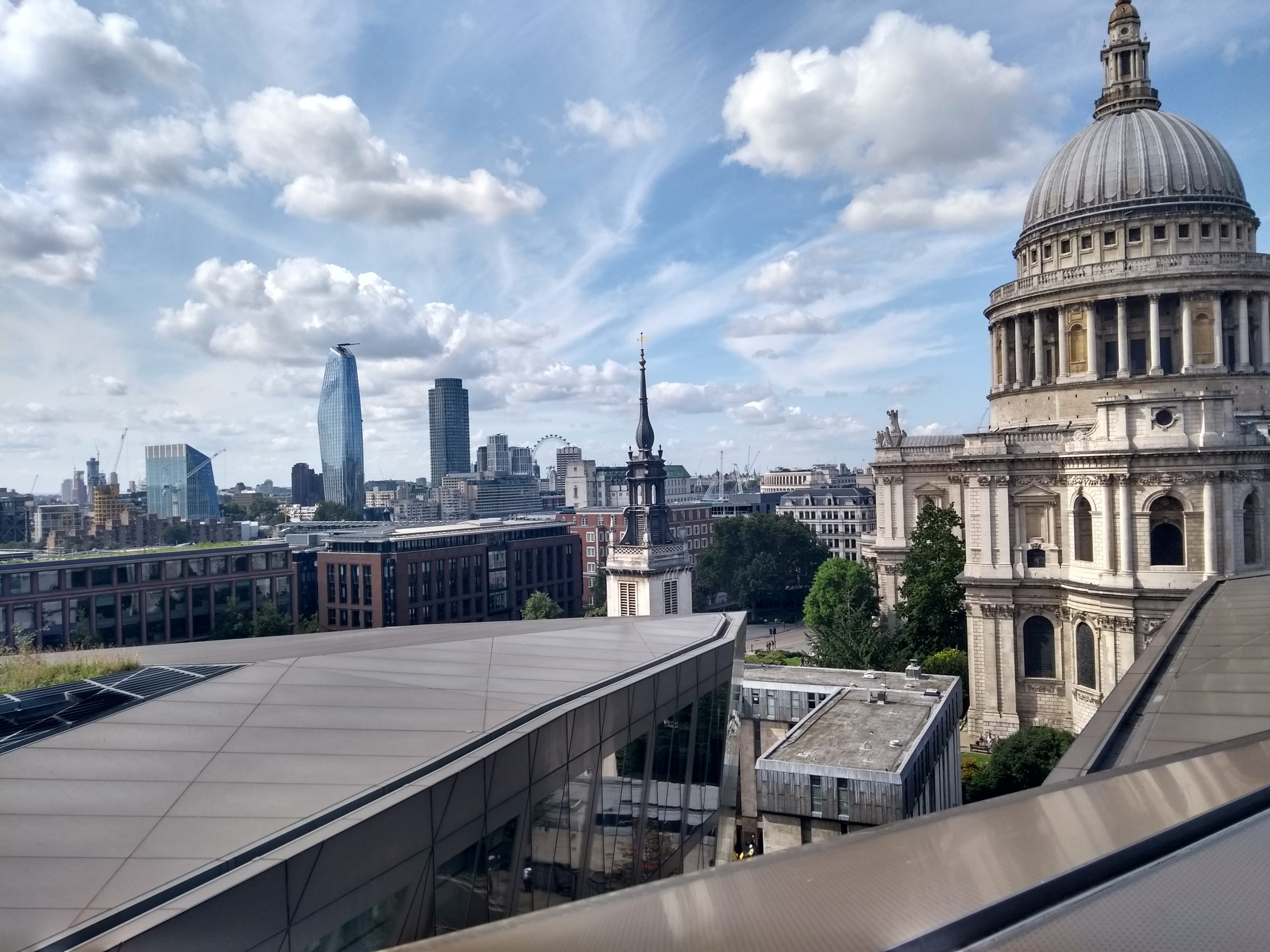 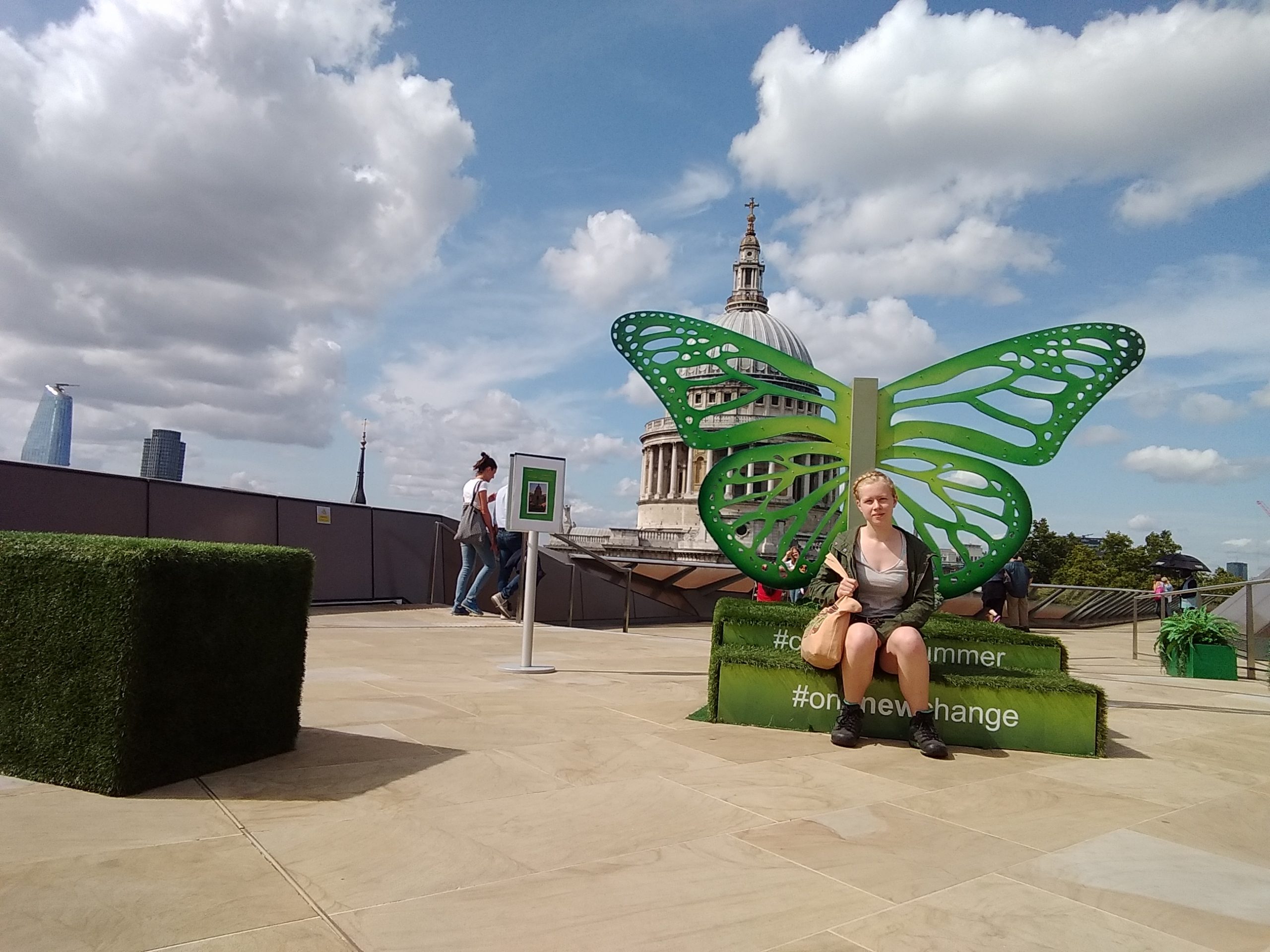 When one thinks of London, green spaces aren’t usually what comes to mind. But after visiting Hampstead Heath, your views might change. Hampstead Heath is a large park in northern London with many things to do. Locals use it for recreational activities such as running, going for walks, and swimming.

It is possibly one of the best locations in London for pond swimming. There are three ponds you can swim in (male, female and mixed) and a lido (outdoor pool).

Whether you are stuck in London due to COVID-19 or are planning a trip here in the future, here is a list of 8 quirky or underrated things to do in London that won’t appear on everyone’s Instagram. Click To Tweet

It costs 1-2 pounds to swim, but the payment is not enforced. You are supposed to buy tickets on a ticket machine outside the pond, which you need exact cash for, but the machines are old and often don’t work. If that happens, talk to the lifeguard and they might let you in free and encourage you to donate.

All proceeds earned from the pools go to the upkeep of the park. The pools have change rooms and bathrooms, but no lockers, so it is your responsibility to keep your valuables safe.

Another part of Hampstead Heath worth visiting is Parliament Hill. It is called that because you can apparently see the houses of Parliament from there. In reality, they are hard to see, but you do have a great view of London. It is a protected view, meaning that developers are prohibited to build anything that could spoil the view. 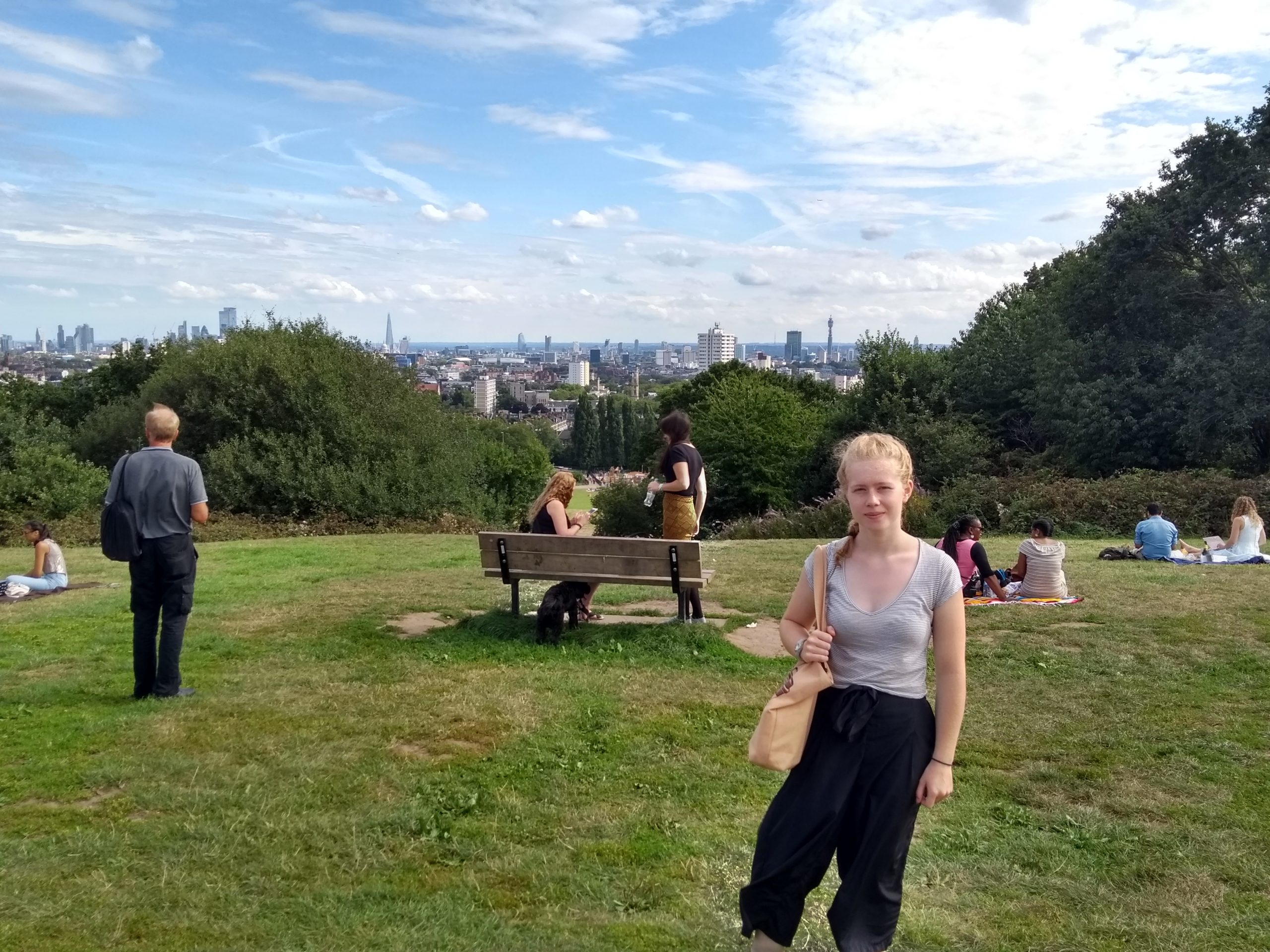 The view from Parliament Hill

Location: The closest tube station to Jason’s wharf is Warwick Avenue, on the Bakerloo line.

Venice may be a prime tourist destination, however, Little Venice is a cute neighborhood that has yet to be discovered by the majority of the tourists that flock to London each year. Like its namesake, Little Venice’s main attraction is the canal running through it.

You can walk along the canal and admire the canal boats docked on the side. There are many cafes in the area with views of the canal, including one on a canal boat.

If you want to learn more about the canals, I recommend taking a canal boat tour. There are several companies that offer this service such as Jason’s Trip. Jason is the name of the boat, which was originally built as a cargo boat in the early 1900s, but transformed into a tour boat once the canals stopped being used to transport goods. They run trips of about 45 minutes from Little Venice to Camden Lock (or vice versa).

On the trip, the guide narrates the history of the London canals and their modern uses. The trip takes you through famous areas of London such as the Regent’s Park Zoo and shows you them from a different angle.

If you want to reserve a place on Jason’s trip, you can book online, but there will likely be places available if you show up half an hour before the departure—a one-way trip costs 12 pounds for adults and 9 pounds for children. 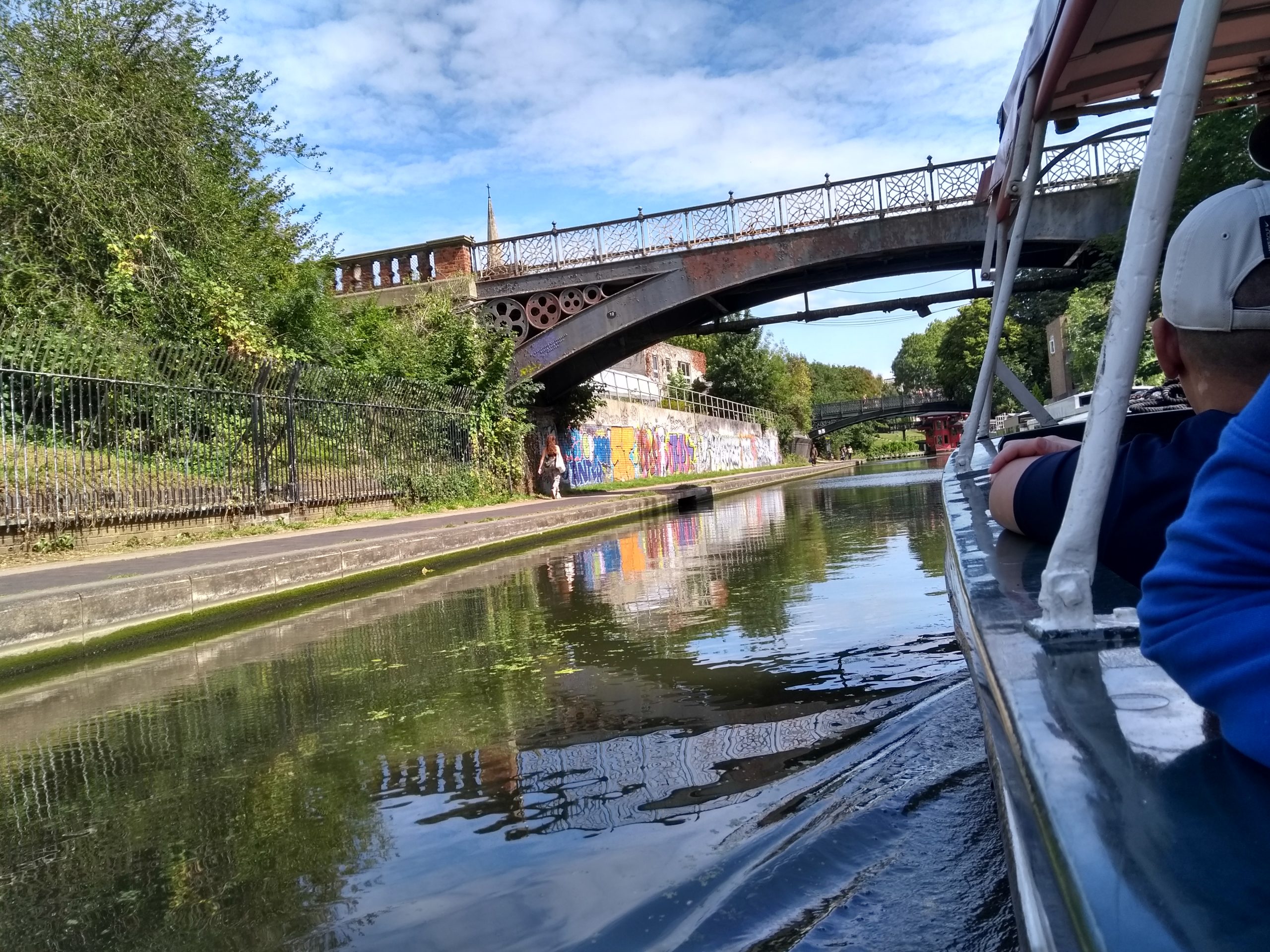 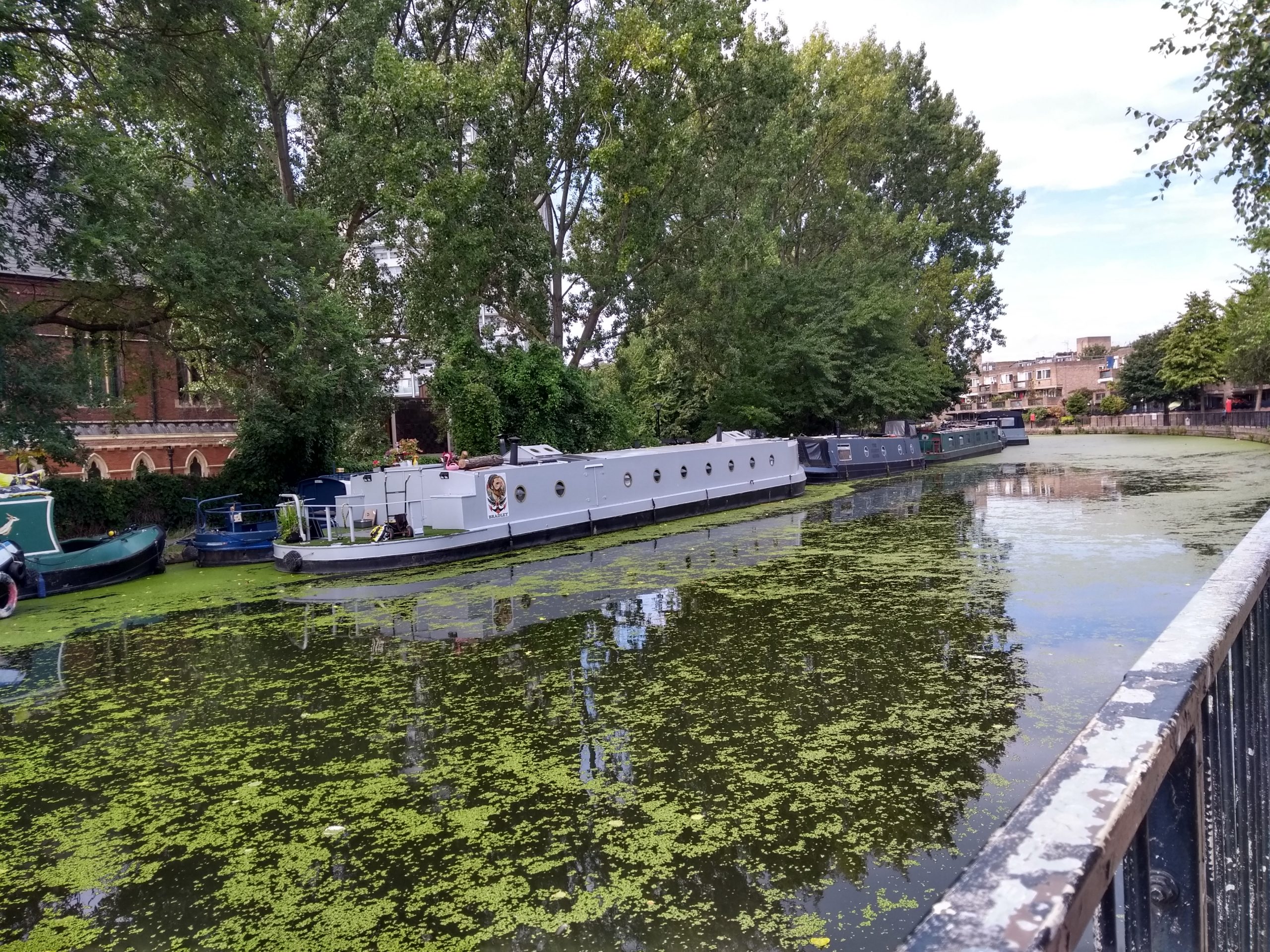 Sometimes having a local guide can be very useful. A local can give you a different perspective on the area, and point out things that you may have otherwise missed. However, being a conscious traveler means voting with your tourism dollars, or supporting local/vulnerable populations.

Unseen Tours is an initiative meant to help homeless people find work and make an income by employing them as tour guides. All of their guides are either currently homeless, or have been homeless at some point in their lives. As a tourist, you will also get a unique insight into London from voices that are not often heard. They run tours in many popular areas in London for a very affordable price of 15 pounds.

Want to test your knowledge of London while supporting a social enterprise? Unseen Tours is currently hosting ‘Not-In-A-Pub’ Quiz nights to support their guides who are currently unable to work.

Thanks to Eurocentric history curriculums there are many aspects of British history that get forgotten, including how present-day England was built through the exploitation of African peoples. It's important for British people to learn the true history of our country instead of the whitewashed version taught in schools.

Black History Walks offers tours in various locations in London that teach visitors about London’s hidden Black history and shows evidence of the African contributions present in the city to this very day. They cover a range of topics, from ancient African civilizations to the Windrush Generation, to present-day institutionalized racism. The tours last about 2 hours and cost 10 pounds for adults and 3 pounds for children.

Physical events are on hold at the moment, but they have tons of educational resources on their website about Black history all over the world.

It's important for British people to learn the true history of our country instead of the whitewashed version taught in schools. Click To Tweet

Feel the female empowerment at The Vagina Museum

Recently opened in 2019, the Vagina Museum in Camden Town is the first of its kind in the world.

Dedicated to reducing the stigma surrounding the vagina, and conversations about gynecological health, this project has been touring the UK since 2017. The admission to this museum is free, and their first exhibit is called “Muff Busters: Vagina Myths and How to Fight Them”. The museum aims to promote intersectional feminist and gender-inclusive values, recognizing that women are not the only ones with vaginas.

People with vaginas often feel embarrassed asking questions about vaginal health, as it is often not addressed in school. The Vagina Museum aims to spread knowledge and awareness on this topic. They also want people to feel more confident in talking about these issues. Be sure to check this out if you’re looking for something unconventional but educational to do in London.

This museum is currently closed due to COVID-19 and needs financial support to avoid permanent closure. The crowdfunding link is available on their website.

While London is an amazing place to visit, the rest of England has a lot to offer as well! From London, you can take a train to many different places in both the North and South of England.

While travel to England should be avoided at the moment, it definitely deserves a spot on post-COVID-19 bucket lists. If you currently live in England, stay safe and socially distant, even if the government says otherwise!

Have you visited any of these spots? Are they on your bucket list? Drop a comment below. 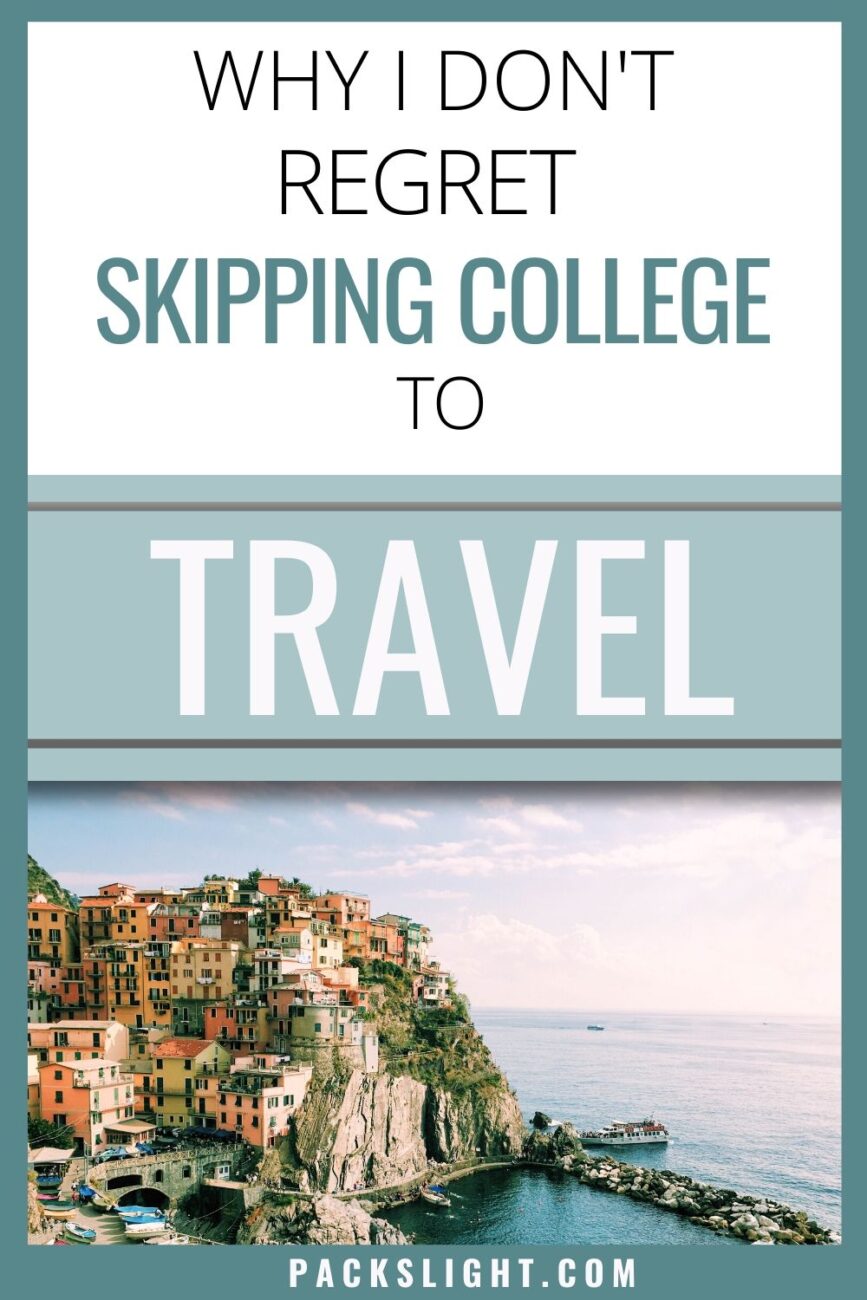 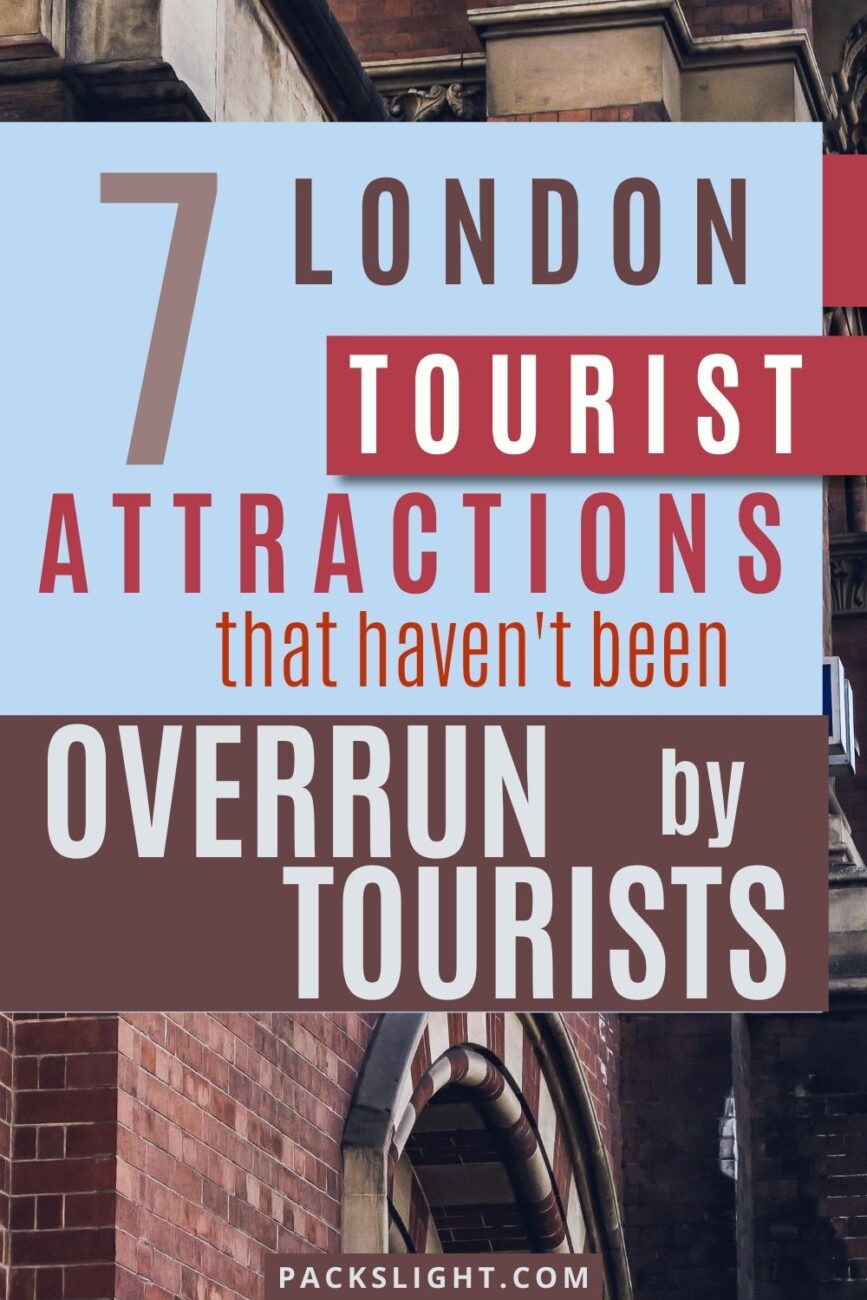 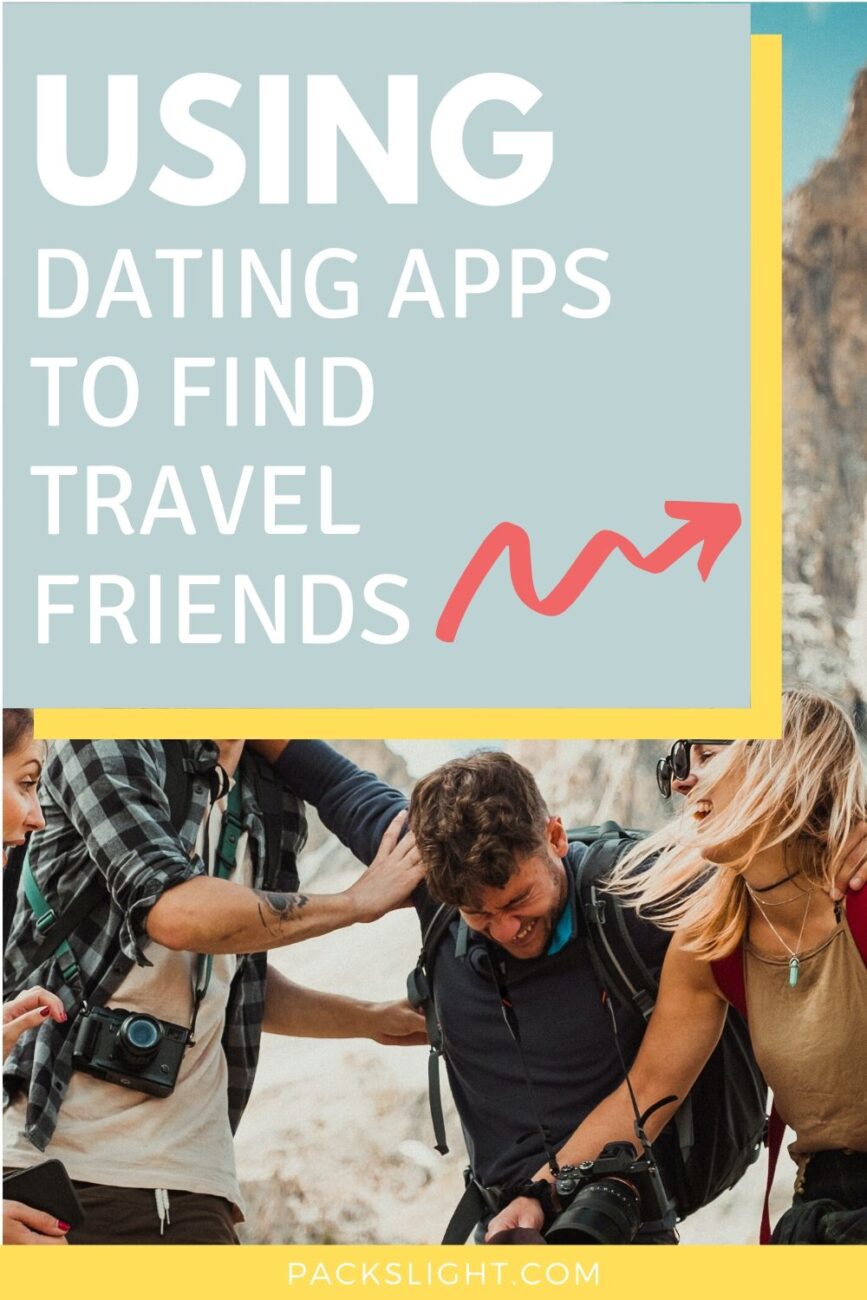 Travel the U.S. For Free Volunteering with the...

7 Strategies to Help You Cope With Your Anxiety While Traveling

Virginia Road Trip Itinerary: from Wise, to Richmond, to the Eastern Shore