The Island of Fuerteventura: Everything to Know About Visiting During the Pandemic 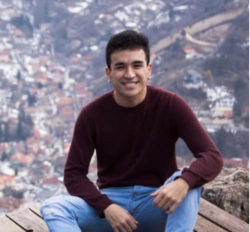 Zachary Sadler
Born in Dallas, Texas, Zack left home at the age of 16 to finish high school abroad in Thailand. Since then, he has spent extensive periods of time studying and volunteering in France, Romania, and Israel respectively. Today, he calls southeastern Spain home as he pursues his Bachelor's degree in the city of Murcia. Follow him on Instagram.

What do you think of when you hear “The Canary Islands”?

Is it gracefully scattered land atop bright blue waters? Or the smiles of European holiday-goers bathed in an endless African sun? Perhaps it’s even the warm sound of Spanish filling the streets, a reminder of the island’s roots in mainland Spain.

If not for the language this may not be an intuitive connection. Tourists often find themselves in the hotspots of Tenerife or Gran Canaria – Destinations with holiday resorts dominating every corner and in-your-language menus.

But those looking to venture off-track to find the true heart of the Canaries?

Look no further than Fuerteventura.

All photos in this article are credited to Sakke Suominen.

Head further east, towards the banks of Western Sahara, and just before arriving, you will find Fuerteventura—while being the second largest island, it is far less of a party destination than its counterparts.

Despite its size, the island is the least densely populated of the Canaries. While still touristy to an extent, it is more common to encounter ex-pats who spend large parts of the year living on the island. Here, you will find a balanced mix of foreigners and Majoreros, the nickname for the locals of the island. 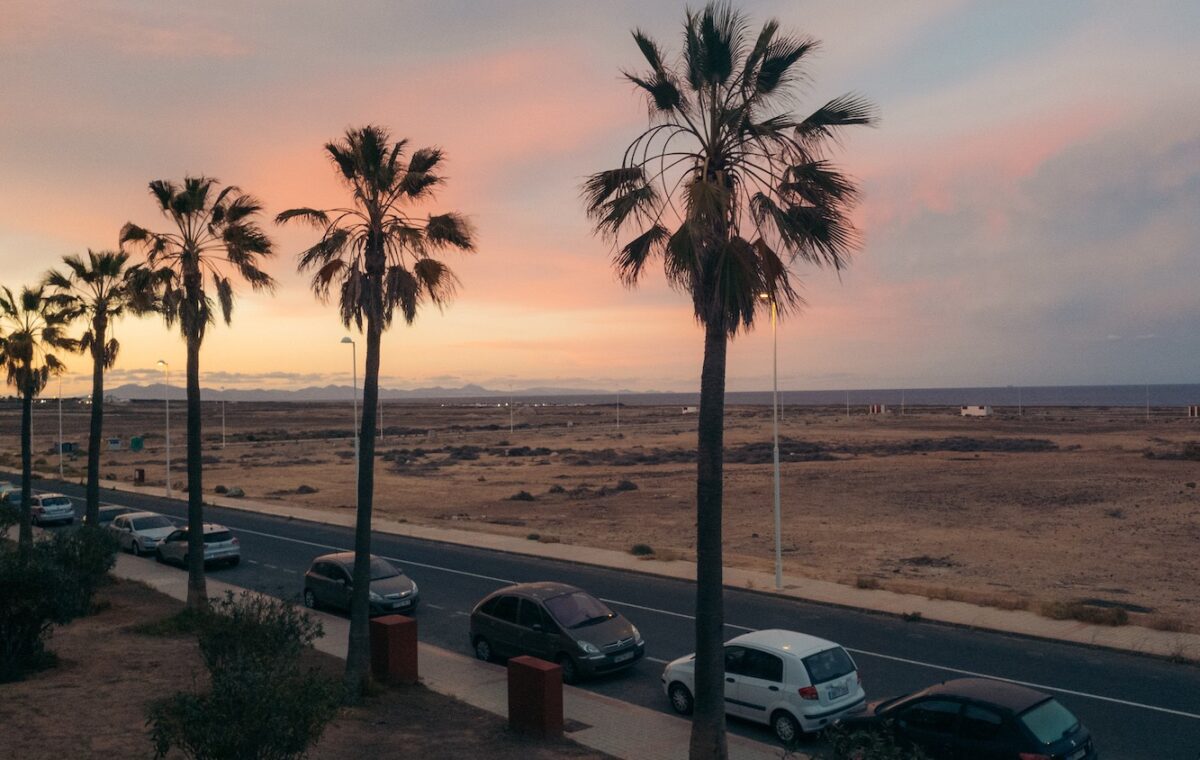 La Caleta is an apartment complex on the outskirts of the province of La Oliva. It sits just off the one-lane highway that runs its course through the island and is blessed with an uninterrupted view of the blue ocean.

The buildings are characteristically Spanish, with shades of burnt yellow and deep red, and the trademark strong winds of the island rustle the numerous palm trees all day long. The demographic is a small sample size of the greater island, with locals and ex-pats alike.

Being quarantined within an apartment complex in the middle of two towns, it is easy to become familiar with the different quarantine situations of your neighbors. Each story is starkly different, but in itself, a snapshot of the sheer alteration of lives and routines due to the virus.

The residents of La Caleta

There is a lovely Belgian woman of 54-years in Fuerteventura alone, for what should have been only two weeks.

It had been fourteen weeks when she spoke to me about her finally-booked flight home at the end of July. With sunkissed skin, she told me of how she thanked God for her balcony facing the sun and that she had lots of Flemish books with her, but she couldn’t help but mention how much she missed her children.

My balcony is directly connected to my neighbor’s with just a waist-high wall serving as a border. In Mediterranean style, the set up allows for a lot of neighborly interaction, which I’m thankful for. While the young Spanish health worker next door is always refreshing to chat with, her dog, Dama, is the real joy.

The beautiful white labrador is a real sight to watch as she looks out onto the sunset every evening. I am told that she was getting sadder as the days passed because she could not spend her weekends sleeping in her camper van near the beach as she usually does. A tough sacrifice, but one that resulted in a bright spot for me in the quarantine. I thanked the waist-high wall for not being an inch higher.It was a long road traveled for those quarantined on the island, but thanks to their diligence, Fuerteventura and all her wonder is back in business! Click To Tweet

Two young local musicians live in the complex. One is a pianist and the other a passionate sax player. They set up in the main square of the apartment once a week as the sun starts to set and the complex would move out onto their balconies and windows. Peering around you see drinks in hand and smiles.

La Caleta is a perfect example of how the people of the island decided to sacrifice, take on responsibility, and bear the burdens of lockdown so that they can reap the benefits of a safe return to normality.

The island is about a three-hour drive from top to bottom, and deciding where to spend your precious time can be a difficult task with so much to choose from. I’m laying out my top 5 must do’s as a rough guide for the lucky traveler that finds themself here.

1. Be a beach bum at Jandía Natural Park 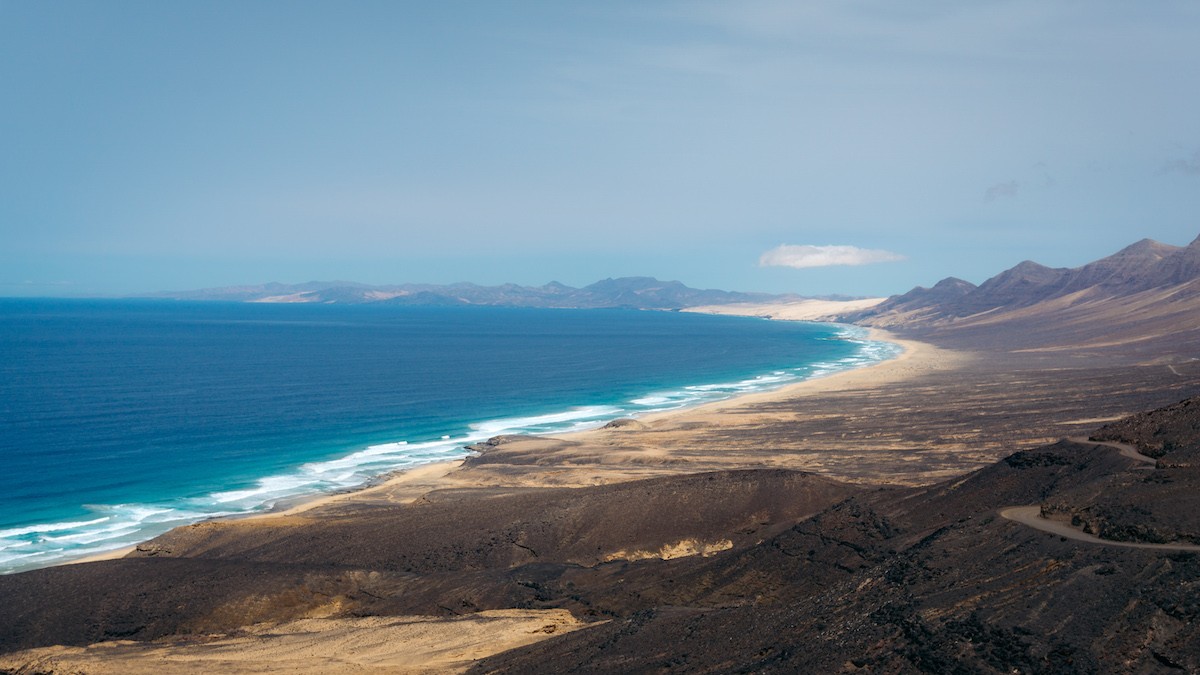 Lying on the southwest of the island and sharing the same name as the peninsula which it calls home, El Parque Natural de Jandía plays home to some of the island’s most striking landscapes.

Most notable is La Playa de Cofete, a first-rate beach that stretches 12 kilometers with striking mountains serving as an immediate background.

Fans of charming small towns will find just that in the old capital of Fuerteventura. Betancuria is located near the center of the island, filled with white buildings framed by bronze windows and roofs.

The entire expanse of the town can be covered in a half hour’s walk among the cobblestone streets and at the center of it all is an impressive church held still by time. Spend the day eating in a picturesque terrace or roaming the various shops filled with trinkets. 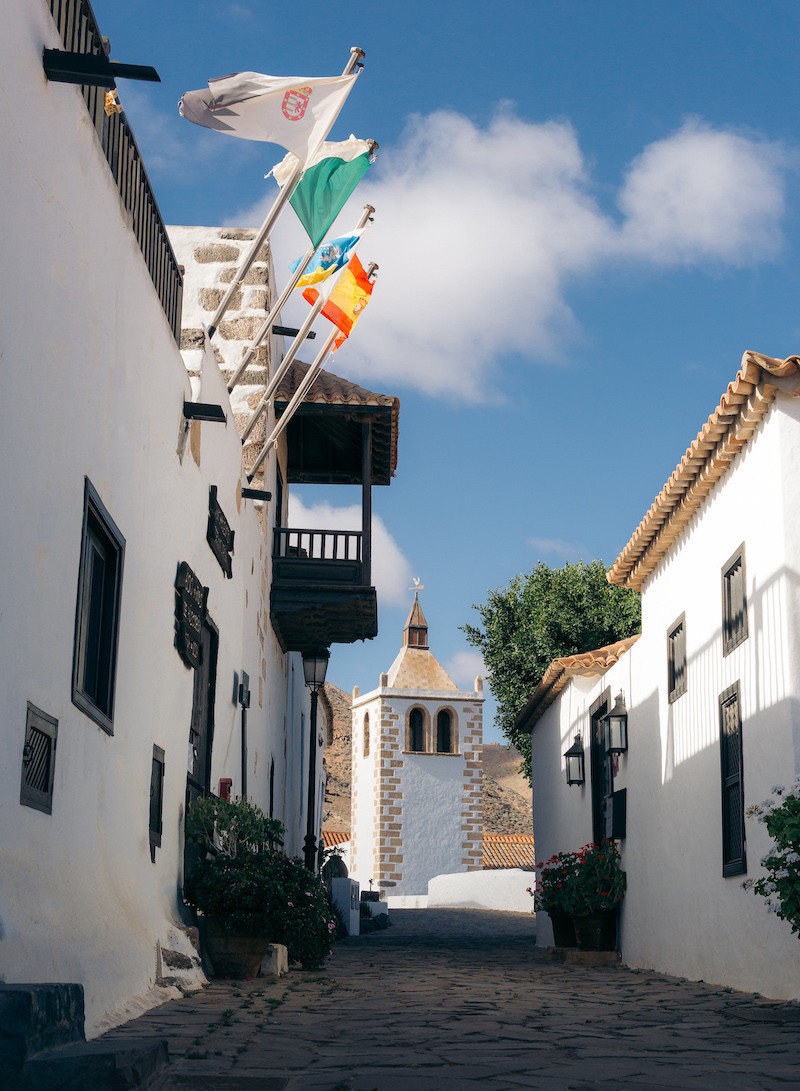 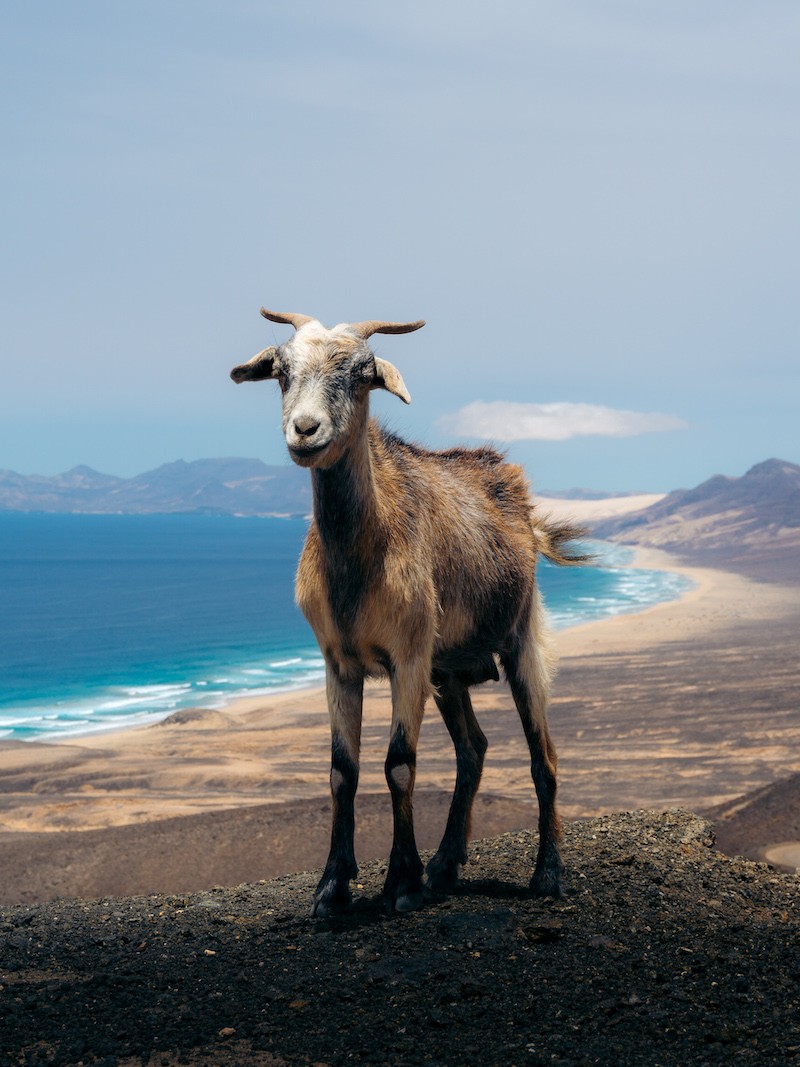 3. Learn to surf at Cotillo 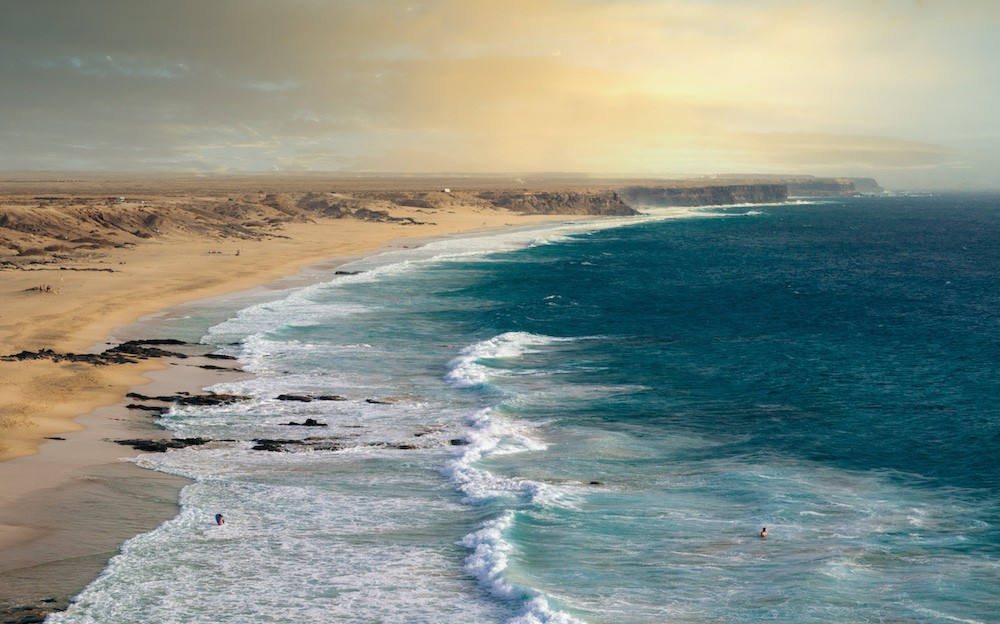 Cotillo is a town situated at the northern end of the island and sits within walking distance from the beach it’s named after. The beach is steeped at the bottom of overhanging cliffs and is a perfect place for beginner surfers.

There are plenty of coasts stretched all along and the sandy bottoms combined with just-right waves leave an easy-going environment to have your first go at becoming a surf star.

4. Take a boat over to Lobos 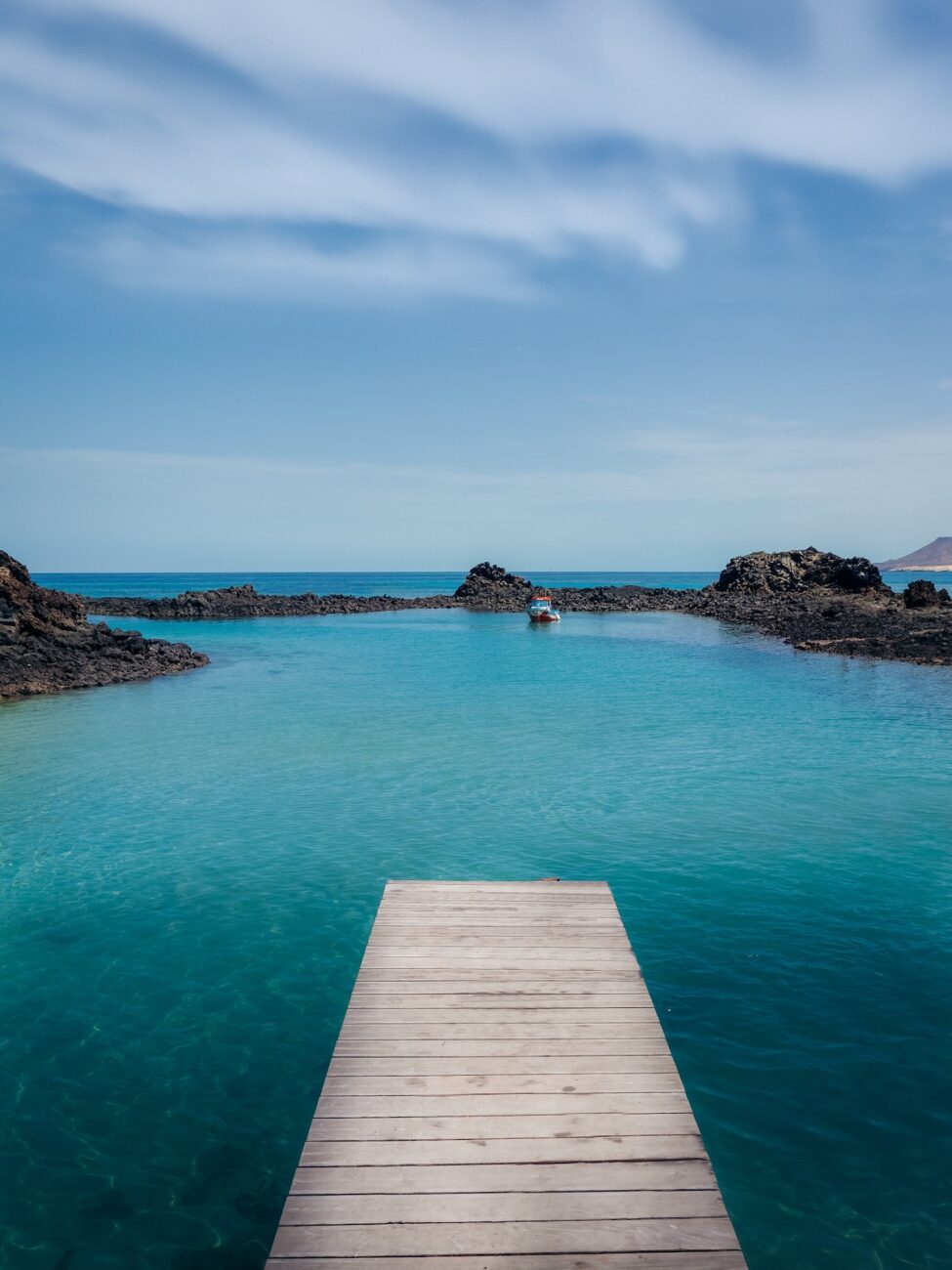 In the north, on the opposite coast of Cotillo, is the happening town of Corralejo. The city itself is a charm – full of lively beach cafes and boutique surf shops.  On top of dining and shopping, the town holds claim to being the gateway to the islet of Lobos: an uninhabited piece of land with waters bluer than you thought possible.

One of the many speedboat companies along the boardwalk in Corralejo will drop you off and pick you up from around 12 euros. Pass the day by hiking the dormant volcano, lazing on the quiet beach or in the natural pool, and snorkeling along with the schools of fish! 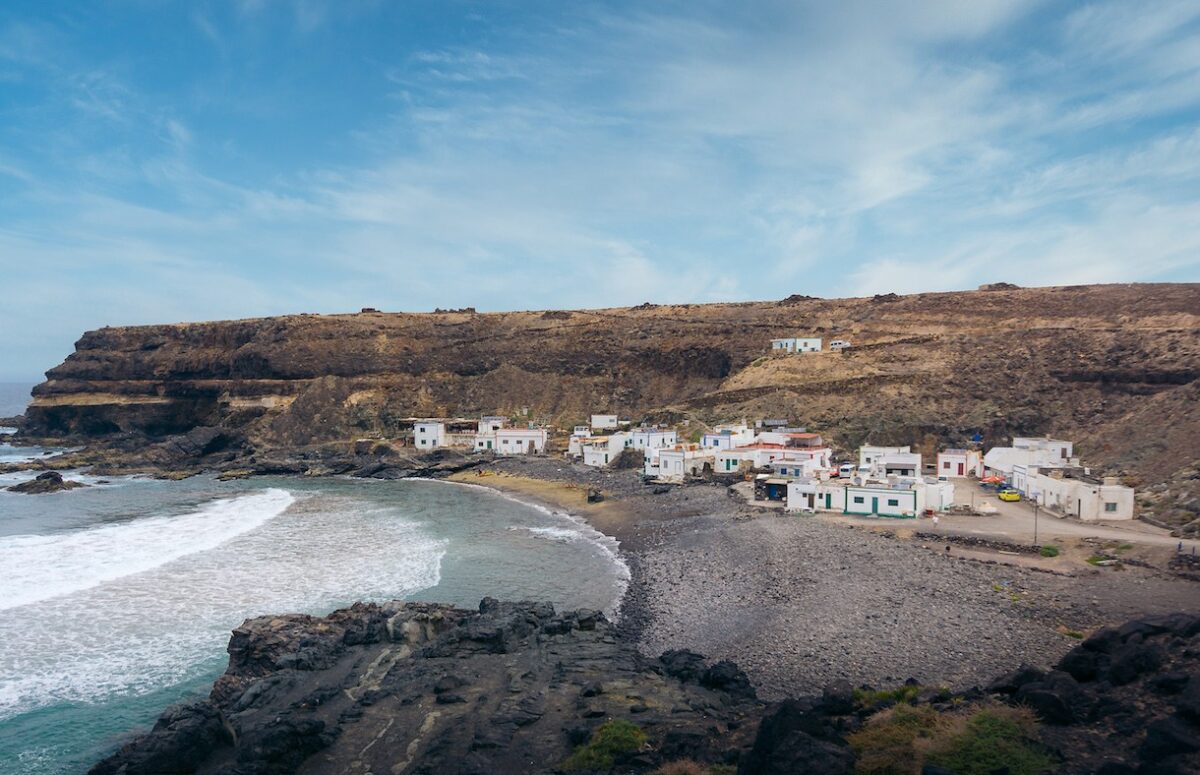 The tiny fisherman’s town of Los Molinos holds a population of fewer than twenty people and is the threshold to some of Fuerteventura’s best-kept secrets. To the right lies daunting caves waiting to be explored and to the left, natural tide pools ready to be enjoyed.

Make sure to go at low tide, the only time of day both sites are accessible.

The streets are filled with joy as people gratefully return to enjoying all that the island offers - and it offers a lot. Click To Tweet

Fuerteventura response to the pandemic

The images conjured at the mention of Spain in the age of COVID-19 is one of a country that has seen the worst of the horrors of the virus. And despite Fuerteventura having a rather low case count themselves (112 currently active cases), this means Majoreros and Expats find themselves in the same fight against the virus that mainland Spain is.

The State of Alarm in Spain lasted an official 99 days, beginning on the 15th of March and ending on the 21st of June. A viciously strict quarantine where residents were only allowed outside to do their weekly supermarket shopping, for medicinal purposes, and to walk their dog (briefly) has positioned the islands as a destination that seems to have overcome the virus.

The inhabitants of the island spent months taking up new activities—a far cry from their usual morning surf sessions or evening walks along the limitless coast, and are now ready to continue along with their normality of an endless summer.

Victory over the virus

As of June 21st, the islands have officially opened their doors to all members of the European Schengen Zone with no restrictions upon arrival. As for third-country nationals, the borders opened June 30th with specific information in regards to each country soon to be announced. Check your local embassy websites to find out more. Americans can find all necessary info through the Las Palmas Consular Agency which covers all the Canary Islands, including Fuerteventura.

It was a long road traveled for those quarantined on the island, but thanks to their diligence, Fuerteventura and all her wonder is back in business! Using Fuerteventura as a case study, travel buffs can gain insight into how a tourism-dependent destination fights a pandemic, and in this case, takes advantage of its victory.

As the rest of Spain and Europe began to ease restrictions, Fuerteventura was of the first to follow suit thanks to their low case count. Life slowly started up again and months later it is safe to say that the island finds itself easily within the new normality that is being aimed globally.

Restaurants, shops, and tourism are back running at full speed with the obligatory facemask if you happen to be indoors. The streets are filled with joy as people gratefully return to enjoying all that the island offers—and it offers a lot.

The island has so much to experience and is home to a tourism-dependent economy, so it welcomes the cautious traveler in such uncertain times. A lot of tourist attractions on the island can be practiced safely due to the activities being primarily outdoors and remote.

With the right measures taken beforehand, and a conscientious mentality throughout, Fuerteventura’s victory can be celebrated by travelers worldwide.

How has your country dealt with COVID-19? Drop a comment below. 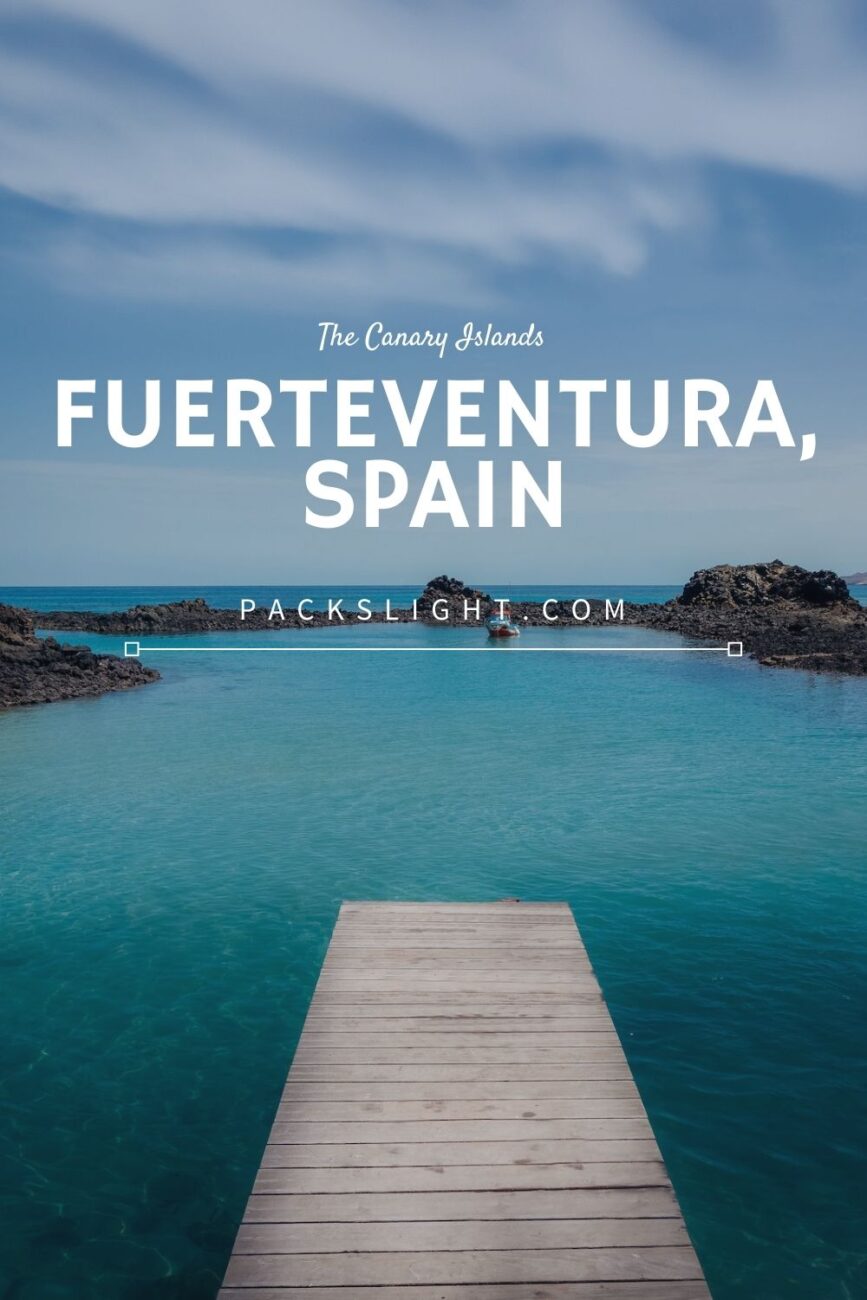 How Travel More with a Full-Time Job or...

Apply to Win! How to Win Travel Contests,...